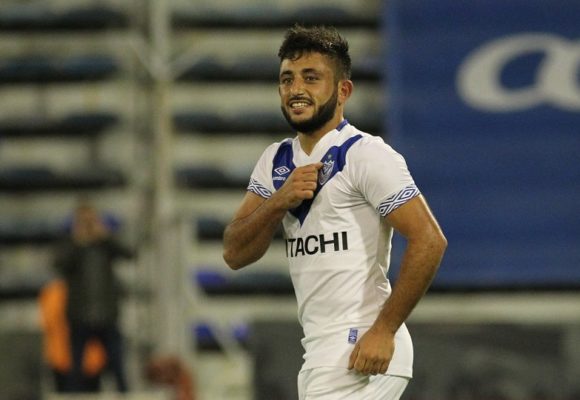 In the month of Rene Houseman’s death, it’s piece of bussiness to pay workship to wings. These eccentric species that are in extinction (in Argentina) due to a poor club managements, disastrous youngster formation and very high fees of fear in first division’s coaches. As Dante Panzeri said, the three things that argentinian football was missing in his time were: ‘leaders, decency and wings’. Nothing change till that time. We are still lacking of those.

But then, out of the blue, wings still manage to appear in despite of an inhospitable environment. Cristián Pavón, Lautaro Acosta, Ricardo Centurión are maybe the most famous wings at the moment in national football. But these are not the only players that nailed it in that position. A hopeful litter of young wings are raising from the mud. One of these, is Matias ‘el monito’ (the little monkey) Vargas.

True to his nickname, this is a very joyful player that feels more comfortable to starting at the left wing, orchestrating with a nice vision of the field through a sensitive right foot, an excellent attracting and liberating passing skill, a decent alley-oop technique and a powerful change of pace. But these initial position in the field is not truly static. He’s is used to swing from left to middle, or left to right, through progressive tree lianas jumping across the field. He can develop himself also as a second striker, or as an right outlet too cause he doesn’t bother to play with his natural side.

His similarities with Alexis Sanchez’s conditions makes him a very interesting player to follow. But also he has similar weak points to the chilean. One of these can be the difficult to read when to stand out to the space, and not constantly asking for the ball to his feet cause in some occassions counter attacks and positional attacks gets predictables after this action.

Wings become pure wings with the help of coaches that understand the need of extend the width of the field. Vargas’characteristic are being boosted by Heinze’s style of play but his growth will not only rely on coaches, if not in his joyful ambition to climb higher trees to reach the best bananas a monkey could aim for.